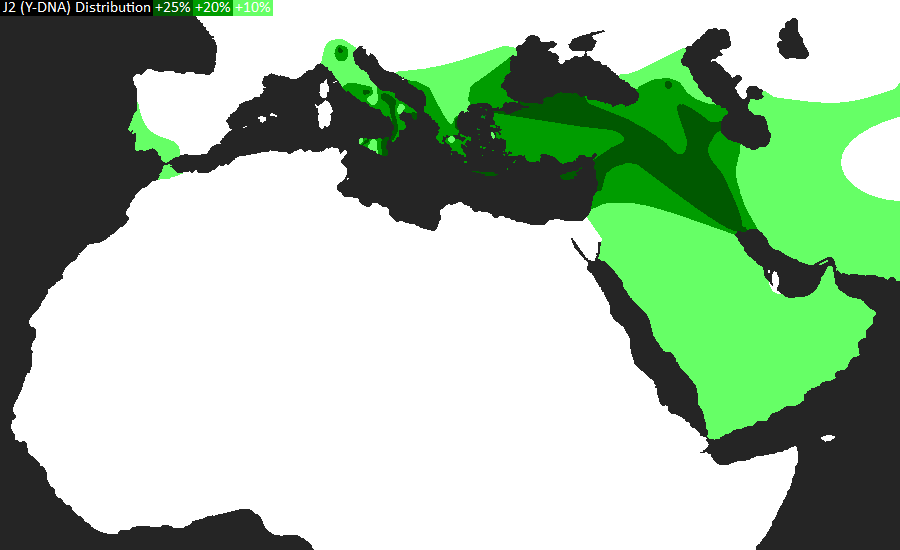 
Early origins
The origin of Y-DNA Haplogroup J maps to the Middle East around the ‘Fertile Crescent’, an area also known as the ‘Cradle of Civilization’ since this area saw the birth of many technological advancements that helped humans move from nomadic hunter-gatherers to an agriculture-based society living in one place.  The sprouting of some the first cities and empires in human history were contingent on these developments and featured the proliferation of Haplogroup J.

The precise location for the origin of Haplogroup J is not known, but its prominence in the Near East/West Asia and the Middle East/Central Asia indicates that it likely arose in one of these regions.  It is closely associated with the Fertile Crescent; an area spanning the Nile and Tigris/Euphrates River systems, with the Levant (present day Lebanon) in between.  This region has encompassed many early cultures and empires from the Stone Age (Neolithic) to the Iron Age and has also been dubbed the ‘Cradle of Civilization’.  Societies, dynasties and empires in this broad region include the Sumerian, Assyrian, Babylonian, Egyptian, Phoenician and Persian.  Haplogroup J is also particularly abundant in Anatolia (present day Turkey) and the Y-chromosome diversity observed here suggests that this area is a possible source of this clade.  Owing to these strategic locations, Y-DNA Haplogroup J is common on three continents: Asia, Europe and Africa.

SNPy trails and the spread of Haplogroup J
Middle East populations belonging to Y-DNA Haplogroup J migrated during or after the Neolithic era to Mediterranean regions and back to Africa; although this did not reach sub-Saharan regions .  This spread contributes significantly to populations in European and African countries around the Mediterranean Sea.  Moreover, this migration, also termed a "demic diffusion", is believed to be the source of new agriculture practices, which included domestication of animals or pastoralism.  It is also associated with sedentism or the custom of living in one place as opposed to the more mobile hunter-gatherer and nomadic lifestyle.  Thus, the movement is tied to the rise of cities and city-states.   While Y-DNA Haplogroup J is linked with this important Neolithic demic diffusion, additional migrations subsequent to this provided other diasporic episodes of this haplogroup and its subclades.

The J2 subclade is similar in distribution to J1, but it is typically present at a higher frequency.  J2 is distinguished from J1 by a lower frequency in Arab populations and the near absence in Africa.  The J2 subclade is highest in Anatolia and prominent in Mesopotamia and the Levant – all areas that served as centers of agricultural revolution.  J2 is common among Turkish, Kurdish and Jewish populations and significant frequencies are found in the Caucasus, Iran, and Southcentral Asia.  TMRCA estimates for this haplogroup range from 4-15kya.

J2 may be an important Y-chromosome lineage that was part of the demic diffusion and introduction of new agricultural practices into Europe from the Middle East and Anatolia during the Neolithic period.  Anatolia could represent a Mesolithic pocket of the J2 subclade, which spread later to Europe in the Neolithic-Holocene periods (10kya) and subsequently featured in the emergence and progress of the Bronze Age (5kya).

Prominent European areas of J2 abundance include the Iberian Peninsula, Italy, the Balkans and Greece.  An interesting general feature is that J2 frequencies drop off considerably in the Northward direction.  From the Balkan Peninsula, there is a drop in abundance moving into and beyond the Carpathian Mountain countries of Ukraine, Romania, and Hungary.  A similar sharp drop-off between Nepal and Tibet is attributed to the geographic barrier of the Himalayan Mountains.  In Russia, the J2 subclade is more frequent than J1, but because it is much lower than the neighboring Caucasus region (e.g. Georgia, Azerbaijan) to the South, there appears to be infrequent patrilineal gene flow from the Caucasus to Russia.  The Caucasus Mountain Range may have been an effective barrier separating Russia to the North and the Caucasus to the South.  See Figure 6 for the sites of these mountains.

Tthe diffusion of the J2 subclade into Europe may have been by mediated by the Mediterranean Sea.  The J2 subclade is abundant on several Mediterranean Islands: Crete, Cyprus, Malta, Sicily, Sardinia and Korčula (Croatia).  The frequency of J haplogroups can distinguish Mediterranean groups (North Africa) (Near East/Arabs) (Central/East/Lebanon) (West).  Similarly, using STR data, three groups can be revealed (North African)(Arab/Palestinians)(Mediterranean/Italy/Sardinia).  The J2 chromosomes in Crete are more similar to those found in Anatolia than those found in Greece when the DYS413 and other STR data are taken into account.  This shows that there are sufficient genetic differences to differentiate the populations and it may represent multiple episodes of J subclade expansion and dispersal.

The J2 subclade is abundant in Iran (30%), known throughout much of history as Persia.  Studies support the introduction of this subclade here from Anatolia, with less contribution from the East in the direction of Pakistan.  The barriers presented by the Hindu Kush mountains in Pakistan and deserts in Iran, may have limited gene flow from the East.  The attraction of the fertile Mesopotamian valley may have favored the migration from Anatolia in the West, thus producing a general West to East migration pattern and spread of J2 into Iran.  A genetic separation between the North and South of Iran may have also been aided by the deserts separating these regions.  Furthermore, cultural alliances between Anatolia and Persia have been strong as exemplified by Babylonian, Assyrian, Persian and Ottoman Empires, lending support to the idea that there was a strong connection from Turkey, through Iraq to South Iran.  It is quite possible that these empires aided the dissemination of Haplogroup J.

The J2 subclade is abundant in India (2-20%), and its frequency peaks in the Northwest region.  Anatolia is most likely the source of this subclade in India, again consistent with the West to East flow of J2.  The date of this invasion points to a period during or after the Neolithic era.  J2 lineage is also found in SW India with an interesting frequency trend: a higher fraction of J2 in the higher castes and decreasing amounts in lower castes.

The J2a subclade is present in the Middle East and Southcentral Asia (~4%), the latter of which includes India and Nepal.  In India, there is a general trend for increased J2a frequency in higher castes. It has also been found in Crete (1-2%).

This sub group has a wide distribution in the world. It is found in the middle East, North Africa, Europe, India and the amercias.

The J2a4a subclade is found at low levels in Anatolia (1-4%) and Georgia (2%).  In the Middle East, it has been detected at similar levels in Iran, Iraq, Qatar and the United Arab Emirates.  This appears to be a relatively low frequency J subclade.
We have 14 participants in J2-arab project who belong to J2a4a, 3 of them is confirmed by the SNP deep clade and the the other 11 particiapnts are predicted J2a4a

The estimated TMRCA is 9kya for the J2a4b subclade . This subclade is abundant in the Caucasus (Georgia 13%, Azerbaijan 4%) and is ancient group – TMRCA estimates at 12kya.  It has also been found at appreciable levels (1-8%) in Anatolia, with preponderance in the Northwest as well as in Italy (~5%) and the Iberian Peninsula (2-3%).  This has led to proposals for migration over land from Anatolia via the Bosphorus Isthmus or over the Mediterranean Sea.  Notably, 10% of the Y-chromosomes on Crete are of this variety.  J2a4b is also found in the Arabian Peninsula, Iraq, Lebanon, Pakistan and India.  Significant frequencies (10-20%) are also found in Jewish populations.

Its distribution has been recorded in Italy (5%), Anatolia (~4%) and the Balkan Peninsula (~3%).  Notable levels have also been located in South Iran, Iraq, Pakistan and Northwest India.  Its presence in Europe, may indicate that the Bosphorus Isthmus was a migratory route.  Alternatively, the Mediterranean Sea could have been used for the spread of this subclade.  It has been found in Ashkenazi Jews, but not Sephardic Jews.

Little information is currently known for the J2a4b1a subclade, but it appears to a minor and infrequent subclade.  It has been found in Konya in Turkey (<1%).

A minor J subclade, currently it has only been found at very low levels (0.2%) in Spain (non-Basques).

J2a4c appears to be a minor subclade with low levels (1%) detected in Iraq and India.

A limited set of studies have failed to detect this subclade and it appears to be a very minor subclade.

Modest levels (1-2%) of the J2a4h2 subclade have been uncovered in Anatolia, Pakistan and India.

J2a4h1a1b appears to be a minor subclade.  Currently it has only been detected in the Druze in Israel (5%).

J2a4h3 appears to be a minor subclade.  Currently it has been detected in Israel for those of Libyan Jewish ancestry (5%) and among jewish population of Jerba island in Tunisia.

The J2a4e subclade has not been studied extensively. It appears with a very low frequency in parts of Anatolia (1%).

The J2a2 subclade has not been studied extensively. It appears with a very low frequency in parts of Anatolia (1%).

The M419 defines the J2a4f subclade.  It has not been widely studied, and has been found at <1% in Northern Iran.  Likely to be a minor subclade.

The J2b subclade has a similar European distribution to Y-chromosome subclade E-V13 and TMRCA estimate (~4.4kya), which is consistent with a common route of dispersal.  It is most prominent in Balkans, Greece and Italy (North and Central regions), reaching frequencies around 5-10%.  Present day countries with the highest frequencies include Albania, Hungary, Greece and Macedonia.  This haplogroup population may have moved through the Balkans and north into Europe via rivers, such as the Danube.  It is present in Crete and the Iberian Peninsula, which could also indicate a spread by sea-faring routes in the Mediterranean.

The J2b subclade is also present in Pakistan, India and Iran (3-4%).  It displays a modest frequency in Egypt, Oman, Qatar and the United Arab Emirates (1-4%) and Africa.  These trends in Arab populations and Africa are reminiscent of the distribution of the J1 subclade and provides evidence that the several of the J subclades share some history in dispersal and expansion.

The J2b2 subclade is present in India, where it appears to have the highest frequency among the middle castes (Dravidian and Indo-European).  Its overall level in India is ~5% and this frequency drops in half in neighboring Pakistan.  J2b2 is also found in Nepal, but no J2b2 has been found in Tibet, providing strong evidence that the Northern spread of this subclade was prevented by the Himalaya Mountains.

The J2b2 subclade is also present in Anatolia, specifically in the southern and eastern regions, which have been proposed as a source of J haplogroups for many regions.  An interesting peak of the J2b2 subclade has been detected in Kosovar Albanians (~17%), whereas the J2b2 levels range from 1 to 4% in the Balkans overall.

The J2b2b subclade has so far only been detected in Greece (2%).  It appears to be absent from surrounding areas and it is likely to represent a minor J subclade.

Limited information is available for the J2b2c subclade and the information available so far has only shown it to be present in Libyan Jewish population in Israel (5%).