Test your mtDNA and explore
your maternal lineage.

Connect with your mtDNA relatives and
trace your maternal line’s ancestry.

A test for both biological males and females, mtDNA is used to help answer questions about relatedness on the direct maternal line.

mtDNA is passed down from biological females

While both males and females inherit mtDNA, only biological females can continue to pass on mtDNA. mtDNA testing can help you discover and verify your direct maternal ancestry by connecting you with other individuals who are descendants of a shared common matrilineal ancestor.

Your mtDNA matches will share a common ancestor with you on your direct maternal line. That common ancestor can be recent -meaning within a generation or two - or more distant - living up to or around 1,300 years ago. The tools and data gained through a mtDNA test can help you learn more about your matrilineal family history. 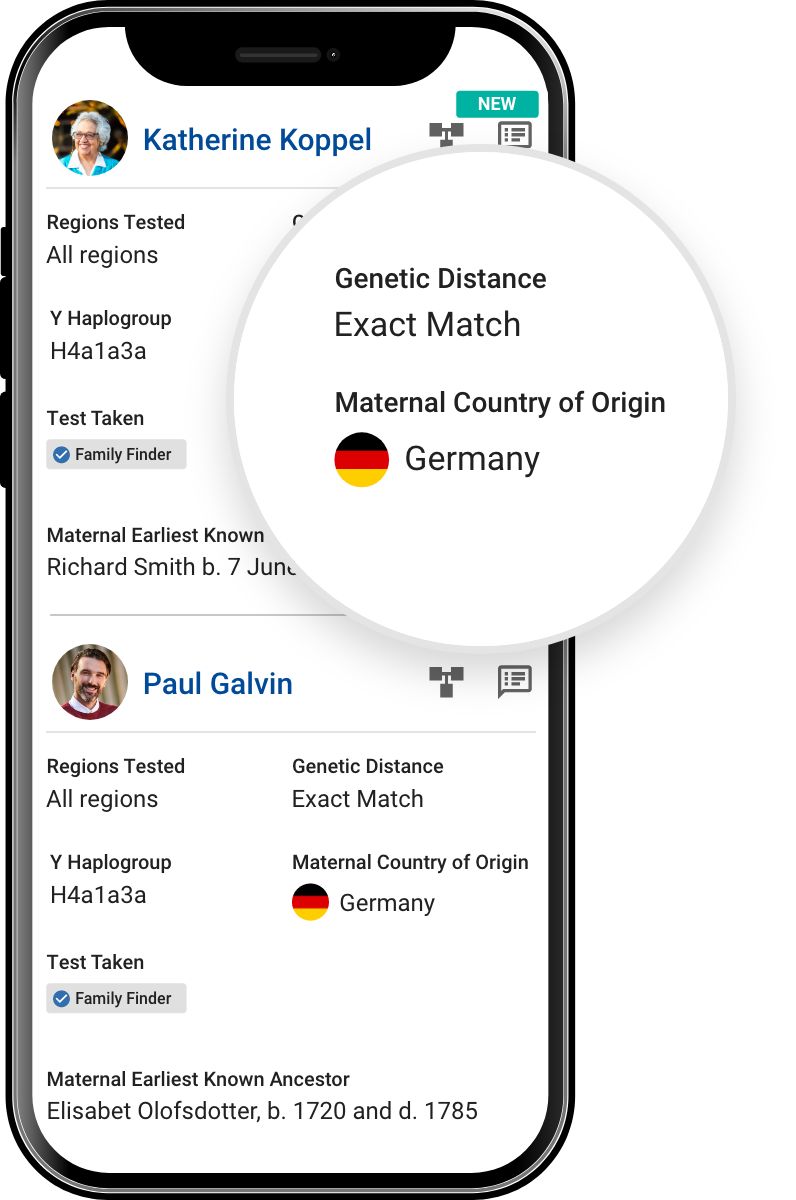 Use mtDNA to determine where your direct maternal line’s ancestors came from, their locations in historic times, and how they migrated throughout the world. 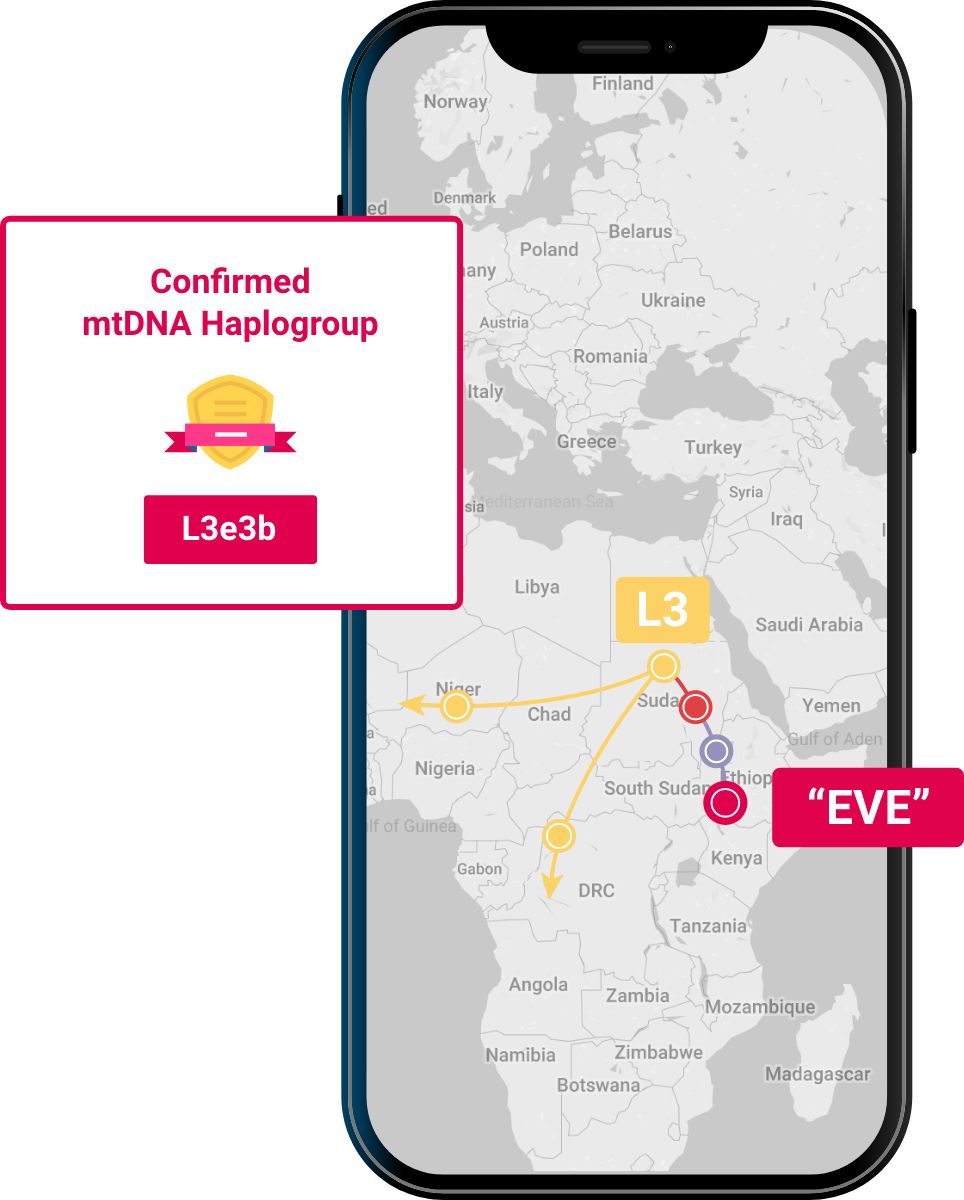 GET YOUR PERSONALIZED mtFULL SEQUENCE VIDEO

It tells the story of your maternal ancestry and is a fun way to share your results with friends and family.

Be part of The Million
Mito Project

Take the mtDNA test to discover more about your maternal line and automatically be one of the one million testers whose results will rewrite the mtDNA Tree of Humankind.

Have questions? We have answers.

Here are the most frequently asked questions about FamilyTreeDNA. If you have additional questions, feel free to visit our Help Center or reach out to our Customer Service team.

mtDNA refers to mitochondrial DNA which is passed from mother to child. While men receive mitochondrial DNA from their mother, they do not pass it on to their children. Testing mtDNA allows for investigation into your maternal line and can help identify living relatives whose mtDNA is similar to yours, as well as ancient migration routes your maternal ancestors may have taken.

What is a Haplogroup?

Every individual who takes one of our mtDNA tests will also receive their mtDNA haplogroup. When humans left Africa tens of thousands of years ago, they departed in small groups that migrated into different parts of the world. Over many generations, each group developed distinct mutations allowing us to identify one from the other. We call these groups of mutations haplogroups, and they can tell us which migratory routes our maternal ancestors traveled.

Will I find out what countries my Mother’s family is from with mtDNA testing?

mtDNA testing will not be able to identify specific countries that your maternal ancestors came from. mtDNA mutates slowly which allows you to find out ancient information (such as your haplogroup), and will not help you learn about your more recent (within the past 200-500 years) origins. However, you can use mtDNA results with your personal genealogy research to contact your matches to find out more about where your common ancestors may be from.

What is the mtDNA journey video?

The mtDNA journey video is a feature that is included when you get an mtFull Sequence test. It tells the story of your maternal ancestry and is a fun way to share your results with friends and family.

I have questions about my mtDNA results, where can I go?

If you have questions about any of your results, you can either contact one of our Customer Support Representatives or look through our mtDNA pages in our Help Center to learn all about mtDNA testing!

How can I figure out who my closest matches are?

Your closest matches are your exact matches at the Full Sequence level. To determine which of those matches share a common ancestor with you more recently than the others, we offer several tools to help you compare your common genealogical and geographical connections, such as matrilineal Earliest Known Ancestors and locations and shared Family Trees. You can add your own genealogical information to your account (Surnames and Earliest Know Ancestor), increasing the chance that a match may recognize their connection to you and reach out.

How can I learn where my matrilineal ancestors are from?

Your mtDNA results will provide you with a migration map that shows you the path your ancient matrilineal ancestors took out of or across Africa tens of thousands of years ago. You can also learn more about your recent matrilienal ancestry from connecting with your matches and utilizing tools that come with the results to learn more about where your matches’ maternal Earliest Known Ancestors are from. Because you will share a common ancestor with your matches, you will also share a common geographic location with them. The tools included with the results and connections you make with your matches can help you determine where that location might be and who that common ancestor was.

What do all those letters and numbers mean?

The Mutations page breaks down your raw sequence for your mtDNA test results. Your mutations determine your matrilineal genetic signature, meaning both the ancient migration path that your direct maternal ancestors took and who your closest matrilineal matches are. >

For the rCRS, you will see another section that lists all of your mutations in a chart, broken down by each region of the mitochondria. The column headers in the rCRS mutations chart provide the following information:

Some mutations will be defined by a letter other than A, T, G, or C. These are mutations in progress, and they are referred to as heteroplasmies. Learn more