Save on Family Finder, Y-DNA, and mtDNA During Our Black Friday Sale! Now Through Nov 30.

Admittedly the Y-DNA branching in this cluster is not yet sorted out for these surnames but let's look at the documented genealogy that potentially ties these Y-DNA matches of McEwens, Lamonts, Sorley's and Livingston's together.

The genealogy of MacEwen of Otter:  Y-DNA of MacEwan, Ewan, Ewing, McQueen

Walter son of John son of Eoghan son of Archibald(?) son of Cristin(?) son of . . . ? . . . son of Sa[i]bara son of Duinn shléibhe son of handsome Aodh who is called the Buirrce son of Anradhán son of Flaithbheartach


The genealogy of the Clan Lamont:  Y-DNA matches Lamont and septs of Brown, Clements, McLaren and Clucas.


The genealogy of the MacSorleys:  Y-DNA match of Sorley needs Big Y but is found in the cluster.


Livingstone
No detailed pedigree exists for this family, originally known as MacDunsleve, later as MacOnlea or MacLeay, and later still as Livingstone


The Boggs/Bogle surname Y-DNA matches likely comes from Glenboig as a sept of Livingston.  Also take notice of the Napier of Eallikinrain branch.

Mr. Guthrie Smith, in his History of Strathendrick, has the following account of the Glenboig family : " In 1614 there was a charter granted by the Duke of Lennox to William Neaubog, alias Macewin, eldest son and heir of William Mackewin, alias Neaubog de Glenbog Wester. In 1691 the proprietor was James M'Aine, called in 1698 James Macewan. In the Valuation Roll of 1723 the following appears : 'John Williamson and Janet Ure, his spouse, their equal share of the five-merk lands of Wester Glenboig, ; John Buchanan, maltman, and Jane Ure, his spouse, their equal half of the five-merk lands of Wester Glenboig, These Williamsons (if the first Williamson was not himself a William MacBwan who changed his name after the fashion of the time) appear to have succeeded the Macewans of Glenboig. The greater part of the lands of Wester Glenboig was afterwards acquired by Napier of Eallikinrain. But in 1796 there was a William MacEwan of Glenboig, writer in Edinburgh, who received a grant of arms at that date from the Lyon office. Netherton, the other division of the estate, is (1890) farmed by Mr. James Ewing (another form of the name), who belongs to a family who have long heen tenants there." There are numerous families and persons bearing the clan name at the present day in Dumbarton, Stirling,''''' Clackmannan, Renfrev/, Lanark, Ayr, on the banks of the Clyde, and in the surrounding districts. Mr. William M'^Ewan, late M.P. for Central Edinhurgh, the magnificent donor of the " M'Ewan Hall," belongs to a Clackmannan family. There have been in the past, and there are now, several Ewen and Ewing families of position and affluence in the Lennox country and the surrounding districts—the Ewens or Ewings of Craigtown and Keppock, of Glasgow, Levenfield, Ballikinrain 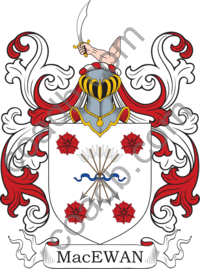 (Glenboig, co. Stirling, 1796). Ar. four roses in saltire gu. in the centre of the field a sheaf of five arrows ppr. banded az. Crest—A dexter arm couped at the shoulder, the elbow resting on the wreath and grasping a scymitar all ppr. Motto—Pervicax recte.

It's worth noting that these MacEwens don't descend from haplogroup R-ZZ87, thought to be that of Niall of the Nine Hostages.  This is worth noting because the ancestor in Lamont's pedigree( above ) is Niall black-knee of Iona who supposedly descends from Niall of the Nine Hostages.  This is either an important discovery about the misplaced origins of Clan Lamont & Clan MacEwen of Otter or the misplaced origins of R-ZZ87 being the line of Niall.  It's also possible that we have incorrectly interpreted this haplogroup to be the MacEwen of Otter lineage.  As I have not seen these surnames clustered/branching together in R-ZZ87 as of yet, I suspect that Clan MacEwen of Otter is not in the paternal lineage of Cenel Eoghan or Uí Néill. 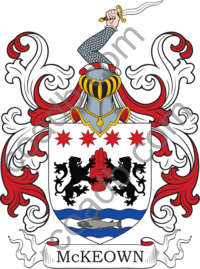 1) (Reg. Ulster’s Office, Ireland). Ar. two lions ramp. combatant sa. supporting a dexter hand couped at the wrist gu. in chief four mullets of eight points of the last, in base waves of the sea, therein a salmon naiant all ppr. Crest—An arm embowed in chain armour, the hand holding a sword, blade wavy all ppr.

The R-M222 subclade of R-ZZ87 is thought to be the genetic marker for Niall of the Nine Hostages. It's already been noted above that the suspected lineage for Clan MacEwen of Otter was thought by many to descend from Niall, but above, it was concluded otherwise. Over time, more data will help uncover the origins for the S588 Cenel Eoghan subclades and clear up where Ewings fit into the branching of Cenel Eoghan.

S588 is likely Eoghan Mac Niall. Ewing Y-DNA branches from several surnames that have origins in Donegal. Many of these Ewings also have MDKAs from Donegal. The surnames seen branching in beneath A19601 of Carr, O'Hair, Cain(O'Cenin) likely all derive from Mac Giolla Chathair from Kilcar Donegal. The branch with Byrnes, Burns, O'Brien likely all derive from Ó Broin and are also found in Kilcar Donegal. Some of these Ewings trace lineage to the Baronage of Quisowen, Donegal. These Ewings might be the ancient namesake kindred of Cenel Eoghan and a branch of Cenel Mac Ercae. 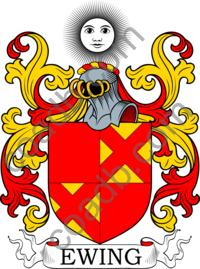 (Ireland). Quarterly, gu. and or, the second and third charged with a saltire of the first. Crest—The moon in her complement ppr.

These McCown/McEwen/McCune/McKeowns branch prior to the formation of Clan MacLellan who likely descend from Thomas of Galloway, Macduallan.  Thomas descends from King Fergus of Galloway and it's likely that Fergus descends from Eugein Caluus. George F. Black states in his "The Surnames of Scotland" that "The name here(M'Gowan), may indicate descent from Owen the Bald"" Mag is often used instead of Mac before a vowel, so Mac-Eoghan/Owan/Ewen may also become transcribed as Mag-Owan/M'Gowan.

⇒ R-FGC5585 ⇒ R-Y87403 ⇒ Clann-a Bhreatannich - Clan of the Strathclyde Briton in Galloway. This very old clan might go back to 1100 AD based on the age of the Y-DNA surname branches. This clan branches off hundreds of years prior to Owain Calvus and is useful to help determine the ancestral ethnic homeland.

⇒ Maclellan genealogy branches off here with Fergus of Galloway.

⇒ 1698 The Galloway Witch, Elspeth McEwan of Cubbox farm in Balmaclellan is the last witch executed in Scotland.

Patrick MacLellan, Sheriff of Galloway was kidnapped and murdered by the Black Douglas, The MacLellan's kin and clansmen, the McEwens, subdued Douglas.  The late Sir Andrew Agnew, in his history of the Agnews in Galloway, states that McEwens surprise flanked the Black Douglas, with whom the besieged Agnews had a feud regarding the Sheriffdom of Galloway. 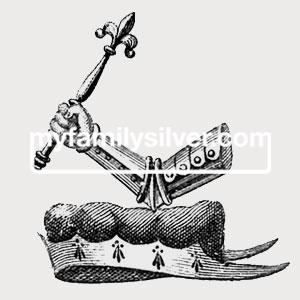 Very tentatively being presented here as crest for Eugenius Calvus. The origins for this Ewing crest are unclear.

BLAZON An Arm In Armour Couped And Tied At The Shoulder Embowed, Resting The Elbow On A Chapeau Gu., And Holding In The Hand A Sceptre.

It should be noticed that until the end of the reign of Henry VIII. the Royal crest of the sovereign was always depicted upon a chapeau gules lined with ermine.  A scepter is an ornamented rod or baton, borne as regalia by a sovereign as a token of authority.  The physical scepters borne by monarchs might vary widely; however, as an heraldic charge, the scepter follows a more standardized form, a baton tipped with a fleur-de-lys.

In theory, there should be MacEwens that descend from Eoghan(Ewan) of Argyll but so far, none have showed up in this project. Ewan's son, Alexander Mac Ewan, married a daughter of John Comyn which explains the bottom half of this coat of arms. The top half is likely connected to McDougall/McDowell who paternally descend from Somerled. The argent rampant lion of Galloway comes from Somerled's wife Ragnhild, who was the granddaughter of Fergus of Galloway. Hence the crown around the neck on both this MacEwan arms and McDowell arms which symbolizes royalty by way of marriage. The above R-MC04 McEwens of Galloway are likely Fergus's paternal line Y-DNA cousins via, Ewen/Owain Calvus.

Somerled's Y-DNA can be found on the Clan Donald USA website. 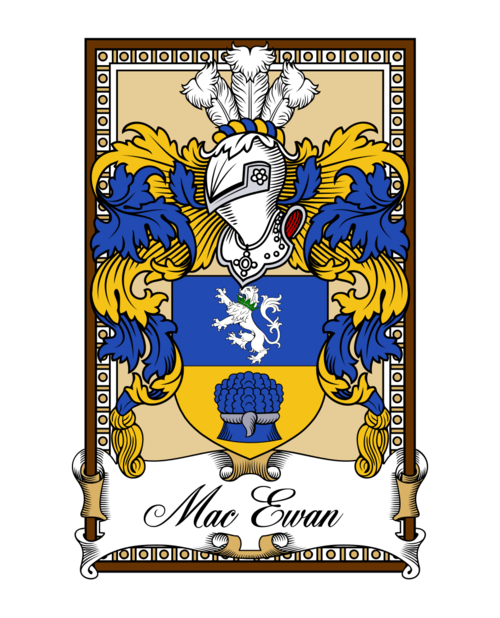 (Muckly, co. Argyll). Per fess az. and or, in chief a lion ramp. ar. gorged with an antique crown vert, in base a garb of the first.

My Thoughts and Conclusions:

There has certainly been a lot of conflating of McEwen surname histories with one another. The common threads make it very confusing. Cenel Eoghan shares history with Kings of Tir Eoghan O'Neals. O'Neals have a documented paternal lineage incorrectly connecting them to Cenel Eoghan through their proven ancestor Niall Glúndub. Eoghan of Otter's adjacent pedigrees of Lamonts incorrectly show descent from Niall Glúndub. Eoghan of Argyll probably lived near Otter but was rather a descendant of MacDougalls. MacDougals have the Galloway lion on their coat of arms. McEwens of Galloway likely should have the Galloway lion on a coat of arms. MacEwens of Glenboig seem to have the Otter lineage in their Y-DNA branching but are from Lennox. The Reviresco crest is a motto used by Maxwells in Galloway whose sept Edgar used an oak sprouting crest. Edzears(Edgars/Adairs) were also made captain of Clan Macgowin. It's also possible that the Reviresco oak stump crest is derived from MacEoin Bissett crest which also used the stump. Incidentally, Bisset married a daughter or Alan, Lord of Galloway( in descent from Owain Calvus ) but that would be a different source of the Eoin//Owain surname and the Reviresco oak stump crest, unless MacEoin Bissetts somehow got the stump crest from Alan's daughter( probably not ). It's easy to see how historians became so confused.

If I had to guess, the MacEwans of Glenboig pedigree was mistakenly attributed to MacEwans of Otter and The McEwans of Otter should be synonymous with McEwans of Argyll and descend from Somerled( even though we have no Y-DNA from Somerled descended McEwans yet ). MacEwens of Otter might also be connected to Clan Campbell with whom they share a tartan from the black watch. I also speculate that Reviresco crest rightly belongs to the McEwens of Galloway/Nith but has since been adopted by McEwens of Marchmont and Bardrochat somewhat arbitrarily. Sir John McEwen of Marchmont and Bardrochat is likely to become recognized as the Chief of Clan McEwen of Otter, despite having no known ancestral connections to the that specific McEwen clan. Sir John's coat of arms most resembles McEwens of Muckley(Argyll) but he also has no known connections to that lineage. There is only one way to find out which line he or any other McEoghan belongs to and that's a Y-DNA test.