The name RIDDLE has frequently come about because of the way the name is pronounced.  Although actually 'rid-dell', it was pronounced by many as 'ree-dool' or as 'rid-dill' and various clerks wrote by pronunciation.  As a result, whatever the clerks wrote, unless the owner of the name knew better, that name and its spelling remained with them. 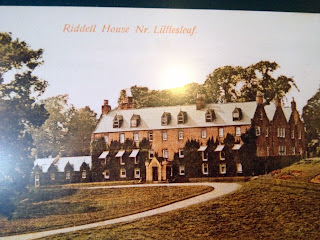 The photograph is of Riddell House (Lilliesleaf) around the early 1800s. It is now a ruin.
RIDDELLs of Roxburgh - this family came out of both Normandy, France and the north of England, moving up into Scotland in the time of King David and accepting large grants of lands.  They also received large grants of English lands from William 'the Conqueror'.  These were in addition to the estates they already held in both Normandy and France (and possibly also in Italy) but the latter is yet to be fully researched;

RIDDELLs of Ardnamurchan and Sunart - this family is said to be related to the above, but conclusive proof of male connection has not been found.  They settled in Argylshire (a strong Viking outpost) and moved down to also settle in Northumberland, England.
It was around 1660 when a lass named Isabella from the RIDDELL house of Ardnamurchan and Sunart formed a first provable alliance between the RIDDELLs 'of that ilk' (the Roxburgh RIDDELLs) by marrying Walter RIDDELL (of Minto). He was the grand nephew of Baronet John RIDDELL (Nova Scotia), a title which continues today.  She was one of eight daughters born to James RIDDELL II (of Linlithgowshire) and Elizabeth, the oldest daughter of George FOULIS of Ravelstone.  It was Isabella's great great grandfather Sir James RIDDELL who first began to use the double "d" and the double "l" in his name. Prior to this, it was spelled RIDEL in that particular family.

RIDDELLs of Angouleme, Blaye and Anjou, France - a powerful family who extended their estates into both England and Scotland (after William the Conqueror arrived) and who married into the French, English and Scottish monarchies.  (This family in fact married into most of the royal houses in Europe). The province of Anjou included the areas of Southern Amorica, Indre-et-Loire and Sarthe.  Today, this area is part of the Maine-et-Loire of France.  It has quite a history (as does its Princes and Dukes) and was owned alternately by France, then England and so on, until about 1487 when it finally became French.

RIDDESDALE - I have only achieved limited research on this name but they too were ancestors of the Riddell family.  Based in Northumberland at Newcastle!

Finally we come to the last main group.  This includes children born to mothers who were either unable or not allowed to marry the father of their child.  These children and their descendants will therefore possibly carry their mother's surname (UNLESS she married and gave her husband's name to her children!)  This group also includes adopted children - whether done openly because their mother was, for example, a widow with young sons who remarried, or whether the adoption occurred because of what is currently termed a 'non parental event' (also known as NPE).  The descendants of these male children will carry the surname of their adopted father, but carry the Y-DNA of another father.  So, if after testing and joining a particular Y surname group, you find you just do not 'match', check out the surname groups of the other matches to which FTDNA alerts you to.  You may find you are actually tied into an important family!

A member of the Project (N6851) sent me the following (taken from the web site "House of Names").  Please note that I neither accept nor reject the following statements as I have not personally researched either of them or their derivations.  In addition, the spelling errors, as mentioned above, have contributed to "distortion of the facts":

RIDDELL: "Recorded in many forms including Riddel, Riddell, Riddal, Riddle (English & Scottish), Ridel and Ridell (French) Riedel, Riedle, and Rydel (German & Scandanavian), this interesting surname has two distinct possible origins, each with its own history and derivation.
Firstly it may be of German and Anglo-Saxon origin, and a locational name from any of the various places called Rydal (Westmorland); Ryedale, in the North Riding of Yorkshire; Riddell, south west of Lilliesleaf in Roxburghshire; and the ancient seat of Ryedale in Kirkcudbrightshire. Locational names were originally given to local landowners, and the lord of the manor, and especially as a means of identification to those who left their birthplace to settle elsewhere.
The second possibility is that Riddall derives from the Old German personal name Rudolf or the later French Ridel, the later meaning describing a stockily-built man. Ridel Papillun was noted in the Pipe Rolls of Lincolnshire in 1163, whilst early examples of the surname include: Goisfridus Ridel in the Domesday Book of 1086 for Cheshire; Alan de Ridale of Yorkshire, in 1160; and William Rydale of Essex, in 1338. Sara Riddall, an early settler in America, was recorded on a "List of the Living in Virginia" on February 16th 1623.
The first recorded spelling of the family name is shown to be that of Galfridus Ridel. This was dated 1048, in "Ancient Records of Scotland", during the reign of MacBeth, known as "The Usurper", 1040 - 1057. Throughout the centuries, surnames in every country have continued to "develop" often leading to astonishing variants of the original spelling."

RIDLEY:  ""English: habitational name from any of various places in England so named, especially the one in Northumberland, which, like that in Cheshire, is derived from Old English geryd 'channel' + leah 'wood', 'clearing'.
Those in Essex and Kent appear in Domesday Book as Retleia and Redlege respectively, and get their names from Old English hreod 'reed' + leah"  and also "The surname Ridley is of Anglo-Saxon origin, and is a locational name from any of various places in England.
Ridley in Cheshire, recorded as "Riddeleg" in 1255, and in Northumberland, recorded as "Ryddeley" in 1268, derive from the Olde English pre 7th Century "rydde", cleared, and "leah", wood, clearing; hence, "cleared wood".
Ridley in Essex, recorded as "Retleia" in the Domesday Book of 1086, and in Kent, recorded as "Redlege" in the Domesday Book, has as its first element the Olde English "hreod", reed, "reedy wood or clearing".
During the Middle Ages, when migration for the purpose of job-seeking was becoming more common, people often took their former village name as a means of identification, thus resulting in a wide dispersal of the name. Alexander de Rydeleye is listed as a witness in the Assize Court Rolls of Northumberland (1279). The Ridleys of Unthank Hall, Northumberland, are an old-established border family, whose members include Bishop Nicholas Ridley (?1500 - 1555), who was burned at the stake in the reign of Mary 1 because he refused to recant his Protestant beliefs.
The first recorded spelling of the family name is shown to be that of Elyas de Redleg, which was dated 1227, in the "Feet of Fines of Kent", during the reign of King Henry 111, known as "The Frenchman", 1216 - 1272."

In all these things, if you have any questions, please email me at RiddellDNA@gmail.com

Before you read any further, if you are a RIDDELL or a RIDDLE (or another similar spelling of this name) and you are serious about using Y-DNA to extend your family or narrow it into specifics, you need to be prepared to test for at least 67 markers!  While I shall accept less than 67 markers, I shall be greatly limited as to how I can help you UNLESS you are prepared to upgrade.  (Not all projects require this, but this project has proven to NEED such testing to enable its members to receive appropriate aid.)

An overview of what is in this website at Family Tree DNA ("FTDNA")may help you find your way around:-  (if you have gravitated here from another website, the URL is  http://www.familytreedna.com/public/Riddle/  )

1.  This specific page is a general explanation regarding the RIDDLE/RIDDELL surname,
2.  Under the 'Goals' tab, you will read about what this project is aiming to achieve,
3.  One of the goals is that residents in the United Kingdom (those with the surname AND who have a paper trail) will be encouraged to test.
4.  With this in mind, a 'donation fund' has been set up to encourage any participants to contribute towards certain tests.  If you see merit in this, I ask you to please consider contributing.  The details are at the foot of the <Background> page.  It is whatever you can spare please.  Even a commitment of one dollar per week will help.
5.  Under the 'News' tab you will find basic family tree outlines of the men in the project.  Note that most of them stop at around the 1900 era.  This is to enable the continuation of the privacy policy in operation.  If anything interests you, please contact me and I shall go to the "owner" of that information and request that you be contacted.
6.  Under the 'Results' tab, there are maps of ancestral migrations according to your Haplogroup.  From time to time, I shall also post other results.
7.  Although you will not be able to see anyone's Christian name, the "Y-Results" tab will show the Haplotypes (and Haplogroups) of the distinct RIDDLE and RIDDELL families separated into their specific family groups.  Note that each group is separate from another which means irrespective of surname, the groups are NOT related.
8.  There is also a mtDNA tab, but by virtue of the mitochondrial testing, the results do not display in a grid-like setting.  Nevertheless, these are arranged into their Haplogroups for easy reference.

I look forward to learning that you are joining.  This is irrespective of your surname, because although the project is primarily for those with the RIDDELL (or variation) surname, it is the DNA results which actually tell the true situation.  (And you can see the diversity of the surnames already in the project but who match the RIDDLEs and the RIDDELLs, by looking at the Y results tab).