According to 'Family Names and their Story'  by S. Baring-Gould, MA, the surname PAGE is a name given to one of the attendants of the King or the manor Baron.
PAGET is the 'lesser' of the position of PAGE (in a similar way as a 'baronet' is the lesser to the rank of a 'baron').

However, he also mentions that it was a trade name - on researching this in the 'Dictionary of Old Trades, Titles and Occupations', by Colin Waters, it is defined as a "general servant with specific duties such as Page of the Hall, Page of the Stable, etc.  These men were dressed in livery or uniform.  In many situations, being a page was the first step towards becoming a squire of a knight and later - if his family had the funds - to becoming a knight.    See the necessary training that was required of a male if his parents desire him to become a knight    http://timesofmedievalages.weebly.com/knighthood.html 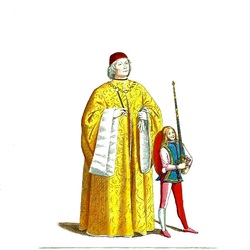 PAIGE is merely a spelling variation.

Charles Nash PAGE, author of 'PAGE FAMILY HISTORY AND GENEALOGY FROM THE YEAR 1257', published in 1911 states that the first historical record of the name PAGE was the son of Hugo dePagham, also named Hugo dePagham, who was knighted "Sir Hugo PAGE" in 1257 by King Henry III. It is possible that Sir Hugo PAGE spent some of his early training serving members of royalty as a PAGE.


On looking further into this man's recorded background, it is intriguing to learn this was a Yorkshire family and it was only after returning from the Crusades that Sir Hugo took up property in Sussex.  So could this mean that the current geographical area of Pagham (in the west country of Sussex, England) became known by that name because of Sir Hugo's lands?

If my speculation is at all correct, then it will not be at all surprising that this is a primary reason for there being so many different lineages of men bearing this surname of PAGE.  As an example, first understand that when surnames came into being used, men frequently chose their name purely because of the family to whom they owed servitude or because of the area from whence they came.  Now consider the differing Haplogroups which exist in today's representatives within the project.  There is E, G, the two Is (I1 & I2), the two Rs (R1a & R1b) and T.  And this is before considering the differences in Haplotypes!

If you know how to use the Archive Wayback machine try  http://www.pagey-dna.org/Page Portion.htm