The geographical areas covered by this project can be seen at the upper right hand corner of the map below: Trabzon, Rize and Artvin provinces with extensions to the following provinces: Düzce, Bolu, Sakarya, Kocaeli and Bursa to the northwest and the northern parts of Erzurum province to the south. 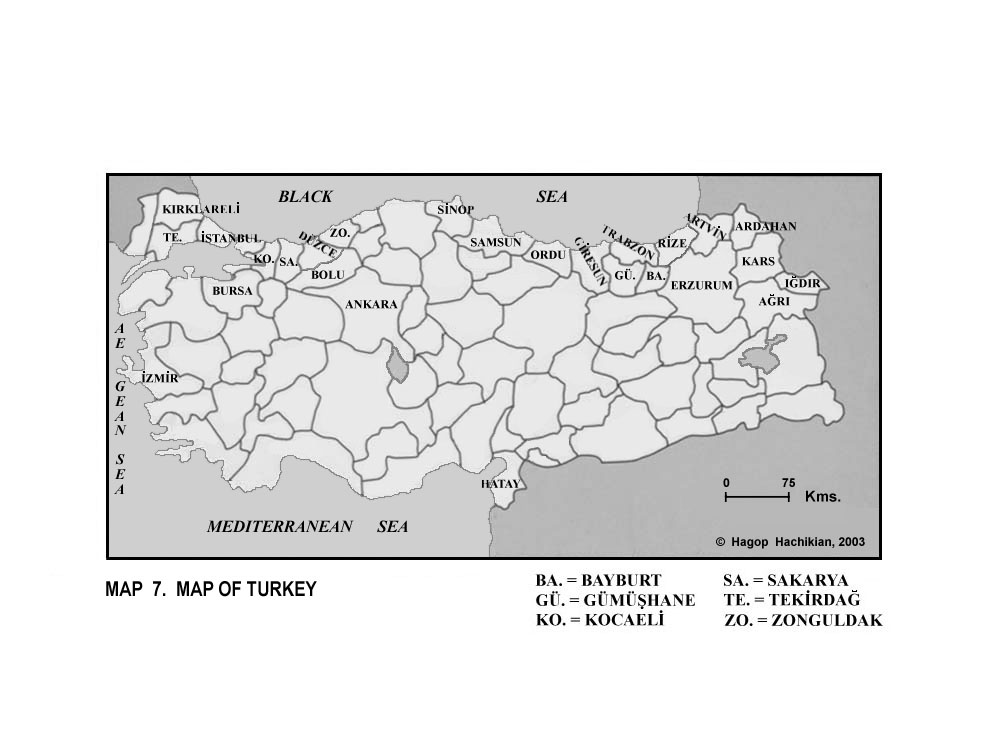 The following book on the Hemshin edited by project administrator Hovann H. Simonian is freely accessible online in its entirety:

The Hemshin, History, Society and Identity in the Highlands of Northeast Turkey.
Published by Routledge in 2007 as part of a series edited by Nicholas Awde "Caucasus World - Peoples of the Caucasus"
Table of Contents:
Part I History
1) Morale, cohesion and power in the first centuries of Amatuni Hamshen by ANNE ELIZABETH REDGATE
2) Hamshen before Hemshin: the prelude to Islamicization by HOVANN H. SIMONIAN
3) The manuscript painting of Hamshen by CHRISTINA MARANCI
4) Hemshin from Islamicization to the end of the nineteenth century by HOVANN H. SIMONIAN
5) Ottoman political and religious élites among the Hemshin: the mid-nineteenth century to 1926 by ALEXANDRE TOUMARKINE
6) Interactions and mutual perceptions during the 1878–1923 period: Muslims of Armenian background and Armenians in the Pontos by HOVANN H. SIMONIAN
Part II Geography, economy and architecture
7) Notes on the historical geography and present territorial distribution of the Hemshinli by HAGOP HACHIKIAN
8) Social and economic structures of the Hemshin people in Çamlıhemşin by ERHAN GÜRSEL ERSOY
9) Hemshin folk architecture in the Akbucak, Ortayol and Uğrak villages of the county of Pazar in Rize by GÜLSEN BALIKÇI
Part III Language
10) Homshetsma: the language of the Armenians of Hamshen by BERT VAUX
11) Armenian in the vocabulary and culture of the Turkish Hemshinli by UWE BLÄSING
Part IV Identity, state and relations with neighbours
12) Some particulars of Hemshin identity by HAGOP HACHIKIAN
13) The Hemshin People: ethnic identity, beliefs and yayla festivals in Çamlıhemşin by ERHAN GÜRSEL ERSOY
14) Hemshinli–Lazi relations in northeast Turkey by ILDIKÓ BELLÉR-HANN
15) Turks and Hemshinli: manipulating ethnic origins and identity by RÜDIGER BENNINGHAUS
The following maps prepared and copyrighted by Hagop Hachikian and extracted from the book show in detail where the Hemshin villages are located in North Eastern Turkey:

a) Distribution of Hemshin villages and administrative divisions in the province of Rize (present  vs. 1881)
b) Historical Hamshen and Hemshin Kaza
c) Hemshin villages in the province of Artvin
d) Hunut, Khodorchur and Khevak: the environs of Hamshen
e) The Islamicized Armenians of Karadere (Trabzon)
f) Hemshin settlement in the Western Black Sea area


Hamshen Armenians (as opposed to the Hemshin) are the descendants of Armenians who refused to convert to Islam and fled Hamshen from the end of the Seventeenth Century onwards. These refugees took mainly refuge in the Canik (i.e. Samsun), Ordu and Trabzon regions. From there they moved from the 1860s on to Abkhazia and to the Sochi region of southern Russia where their descendants are now settled. The general location of the Hamshen villages in Abkhazia and Southern Russia can be seen at the center left hand corner of this MAP. They are shown as "a)" in the purple Abkhaz area and in one location immediately to the North-West.