The purpose of this project Castledermot DNA Connections is to build a comprehensive picture of familial relationships with connections to the village and parish of Castledermot and Moone Co. Kildare Ireland. The project goals are more fully explained after the project logo below which tries to summarise the reasons this DNA project was launched. 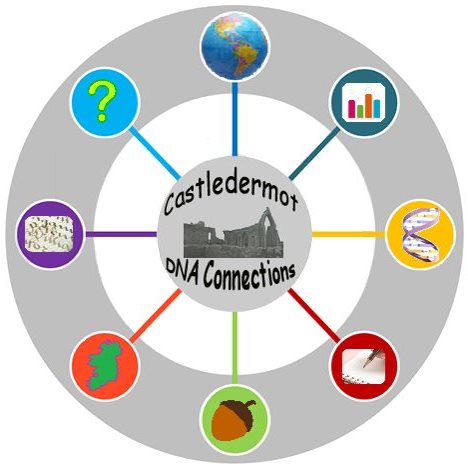 * For the purposes of this project Castledermot incorporates all of Castledermot RC and COI parishes including Ballaghmoon, Dunmanoge, Grangenolvin, Grangerosnolvin, Graney, Kilkea, Levitstown, Maganey, Moone, Narraghmore, Timolin and surrounding areas. Historically Moone was part of Castledermot RC parish so those who have ancestral connections with Moone may find that these records are available in Castledermot.

The project logo above aims to explain the purpose of this Castledermot DNA Connections project.

How we relate to each other and previously known family relationships have for many families been lost through the generations. However, utilising the power of DNA testing, combined with research and collation of old and disparate record sets, new insights are allowing the reconstruction of family trees that a number of years ago would have been considered impossible.

Modern atDNA yDNA and mtDNA testing has the power to untangle family branches, reconnect distant cousins and most importantly when viewed with very old records especially those at the beginning of Irish record keeping in the mid to late 1700s should help to solve many family tree brick walls.

DNA testing has the power to assist in working out which record in fact belongs to your family through both the confirmation and elimination of matches involving a number of analytical processes. This goal however becomes much more likely to be fulfilled where there is a large concentration of DNA testing in the same location and therefore the primary purpose and goal of this Castledermot DNA Connections project is to do precisely that; "to bring together into one place, as many DNA tests as possible from people with Castledermot connections, so as to break down brick walls and in doing so untangle and solve hitherto difficult and complex family connections".

The project logo above was developed to summarise and encapsulate the aims, ambitions and goals of this project.

The logo represents Castledermot village and parish reaching out from its centre;

I hope the goals of this Castledermot DNA Connections project are of interest to you and that you will consider joining and helping contribute to unearthing the ancestral origins of an Irish Village.

This work is licensed under a Creative Commons Attribution-NoDerivatives 4.0 International License.